The M16A2 is the standard issue assault rifle for U.S. Army troops.

This variant of the M16A2 rifle comes with the M203 underbarrel 40mm grenade launcher attached. The addition of the M203 raises the weight of the weapon from 2.52 kg unloaded to approximately 5.48 kg. The M203 is a single shot, breech loading weapon. The M203 has a maximum range of approximately 400 meters. During combat, the recommended minimum safe range for firing the grenades is 31 meters. 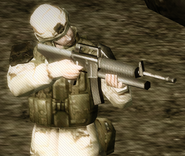